This is an experimental addition to the Asahi Kanji app.
For a presentation of the whole application please see:
http://www.japanese-kanji.com/android/english/asahikanji-en-android.htm

Frame a single kanji in the clear crop box at the center of the screen.
You can leave as much white space as you want around the character, but make sure you don’t include unnecessary parts from neighboring characters.
If there are other high-contrast elements in the crop area, besides the kanji you want to read, they will be misinterpreted and recognition will fail.

The main weakness of OCR with a hand-held device is that it is difficult not to shake.
The slightest shaking gives wrong readings.
This is the reason why zooming is not enabled, but you can resize the crop box within a certain range by dragging in or out with one finger anywhere on the screen. You do no have to use the crop box corner handles.

Focus does not have to be perfect.
With some fonts, when there are small gaps between strokes that should be connected, a slightly blurred image can even give a better result.

Characters do not have to be black on white but keep in mind that colors will be dropped before the OCR analysis.
The resulting grayscale image must have high enough contrast.
The kanji on the left cannot be seen by the OCR engine.

When you feel you have got it right, tap any shutter button icon.

If the OCR engine returns and displays the correct kanji, you can tap the eye icon to see the corresponding card, provided it is a Jōyō kanji.

If users feedback is positive, a future version of Asahi Kanji will display more info from the KANJIDIC dictionary.

If the OCR engine does not display the correct kanji, tap the “Reset for new OCR” button and try again.

Using this OCR feature is like using a cheap digital camera which can take excellent pictures when the conditions are right, but takes poor shots in non standard situations.
You have to learn how to get the best of it.
Do not give up too quickly.

Beside the size and clarity of the target kanji, the type of font seems to be a major factor for a successful analysis.

Regular, standard (that is “skinny”) fonts give an excellent recognition rate, close to a 100%.

With bold fonts the recognition rate drops down. Forget about fancy calligraphy but "neat", scholarly calligraphic glyphs like those used in Henshall's "A Guide to Remembering Japanese Characters" are perfectly recognized.

The other activities like the kanji drills rely on Android OS only and can be thoroughly tested.
Unfortunately, it is not the case with the OCR function because it uses a camera whose capabilities and specifications vary greatly depending on the device model.
Google keeps track of the number of devices on the market that should be compatible with each application, according to its requirements (like a camera, a touch screen, etc.)
On September 16, 2013 (Asahi Kanji version 1.4.0 release date) 3553 devices were listed.

Cameras can be mounted differently on smartphones and tablets, their "natural orientation" varies and what you see on the screen is generally not what the camera sensor sees.
Therefore, the kanji image could be sent sideways or upside down to the OCR engine without you noticing it, resulting in a failed recognition.

Some camera models are notorious for certain bugs, fortunately apparently non fatal (they do not crash the app).
Your feedback, whether positive or negative, will be essential for the future development of this function.

The OCR function was developed and tested on a Google Galaxy Nexus, a standard device recommended for Android software development.

What is the use of OCR limited to a single kanji?

The Asahi Kanji app was designed as a tool to help people review or memorize Japanese kanji.
For those who are lucky enough to study in Japan, the OCR function will be helpful.
Kanji are everywhere around us in the streets, trains, shops, on signboards and posters...
More than often a kanji that we “almost know” or “definitely knew but have forgotten” catches our eye.
We just need a “booster shot” at the right moment, in the right environment, for the character to stick in our mind.
This app tries to give you this possibility.

Asahi Kanji does not collect nor transmit any information.

Up to version 1.3 this application did not require any particular permissions to run.

This Optical Character Recognition module (OCR) was introduced in version 1.4.0 and several permissions are now required.
When you downloaded an update or the app for the first time, Google Play used to display the following dialog box.

Today's messages will look different, as the Google Play interface keeps evolving all the time. 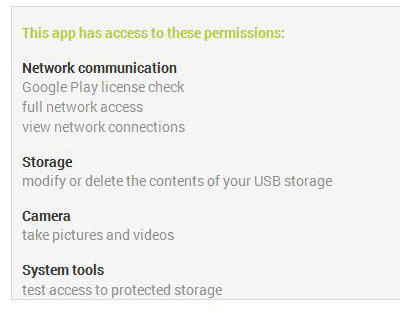 The wording like "full access", "view", modify or delete", "take pictures and videos" can understandably be frightening, although these actions are now standard on smartphones.
Network
"full network access"

Network access is needed by the app in order to download two large files from googlecode.com
These files are the data needed by the Tesseract OCR engine to recognize Japanese characters.

When you decide to download the files mentioned above, the app has to check if you have Internet access over wifi in order to display a message when it is not the case.

Storage
"modify or delete the contents of your USB storage"

The Optical Character Recognition module needs access to your camera.
It does not take pictures nor videos though.
It just extracts the kanji image from the camera preview before sending it to the OCR engine.

As for Asahi Kanji JLPT-N5, it is a free demo that does not include OCR, does not require license checks nor any permissions to run.
It is also ad-free (no banners).

For further details send a message to support@japanese-kanji.com